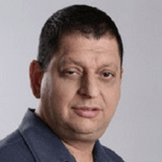 Prof. Doron Friedman is an Associate Prof. in the Sammy Ofer School of Communications, affiliate faculty at the MA in HCI Program, and the head of the Advanced Reality Lab (http://arl.idc.ac.il). His Ph.D. thesis, carried out in Computer Science at Tel Aviv University, studied automated cinematography in virtual environments. He continued as a Post Doctoral Research Fellow in the Virtual Environments and Computer Graphics Lab at University College London, working on controlling highly immersive virtual reality by thought, using brain-computer interfaces. In addition to his academic research Doron has also worked as an entrepreneur in the areas of intelligent systems and the Internet, he and his lab members often work closely with start-up companies, and his inventions are the basis of several patents and commercial products.
Since 2008 Prof. Friedman and his lab members were involved in several national and international projects in the areas of telepresence, virtual reality, and advanced human-computer interfaces. Doron’s research is highly multi-disciplinary and has been published in top scientific journals and peer-reviewed conferences, including Artificial Intelligence, Human-Computer Interaction, Journal of Neural Engineering, Journal of Neuroscience, the Proceedings of the National Academy of Science (PNAS), and more. The lab’s research is often covered by national and international media outlets, including CNN, BBC, New Scientist, National Geographic, Scientific American, and more.